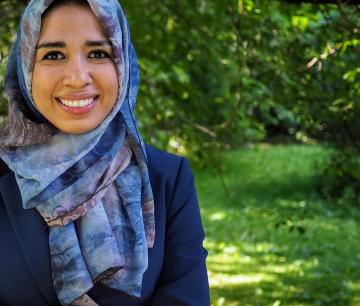 Imtenan Abd-El-Razik is an immigration staff lawyer at Waterloo Region Community Legal Services (WRCLS).  She studied science at York University before obtaining her law degree from the University of Toronto. After her call to the Ontario Bar, Imtenan worked at the Cairo-based NGO Africa & Middle East Refugee Assistance (AMERA), representing refugees before the United Nations High Commissioner for Refugees. For several years before joining WRCLS, Imtenan ran her own practice in Toronto focusing on Middle East and North African refugee claims, appearing at the Immigration and Refugee Board and the Federal Court.

She has also taught Legal Research and Writing at the Lincoln Alexander School of Law.

Imtenan has volunteered with the Human Rights Committee of the National Council of Canadian Muslims, was a founder of the Canadian Association of Muslim Women in Law, and has presented at conferences held by the Law Society of Ontario, Legal Aid Ontario, and the Ontario Bar Association.